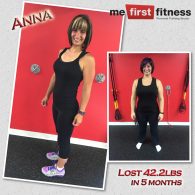 “I have always been athletic and enjoyed sports, however I put my own interests aside 12 years ago when I became pregnant with the first of my four children. I told myself that whatever weight I put on during my pregnancy would easily come off. Boy, was I wrong.

In 2012, my fourth child was born. That’s when I began to work out at home, and I managed to lose a few pounds. My friend Carrie and I used to go for Breakfast and Lunch pretty frequently. One day we both decided we should do something healthier and become active together instead. We decided to look into Gym’s to become fit.

I joined Me First Fitness in 2014 and I was able to keep that weight off until 2015. That’s when I had two big setbacks — I lost my Dad, and I had surgery on my leg. I kept making excuses for not returning to my workout routine. It was Christmas time when I finally stepped on the scale, as my clothes were getting snug and uncomfortable. I was shocked to see I had gained an additional 15 lbs. That is the moment I decided I needed to make some changes.

Me First Fitness was advertising a Body Shred Challenge for the New Year as the calendar turned to 2016. I was hesitant to take part, but Mark and a few of the members convinced me to give it a try. Through the challenge I learned that there is definitely a balance between eating the right foods and exercising in order to lose weight. Although I did not win the challenge, I won personally. I lost 22.8lbs and 4.9% Body fat. My goal for the challenge was to lose 30lbs in 60 days. I still had a few pounds to go, so I kept going after the challenge ended — eating healthy, exercising, and tracking my caloric intake on a daily basis using the My Fitness Pal app.

Today I am proud to say I have lost 39lbs and have learned some very valuable lessons in maintaining a healthy lifestyle. A big thank you goes out to my family, friends and the Me First Fitness community for supporting me through this journey.”

Virtual Arms & Abs with @coach_trishabell on this

No joke. We don’t close. We adapt! #mefirstfitne

Virtual Easter Tabata with @jennb1971 about to go

Whether training from home virtually or with us in

Congratulations to these amazing individuals for t

Another year and another 60 day challenge complete

Big shout out and congratulations to @lyndsey_mcna

Safe and effective PERSONAL TRAINING at a private

With our 6am in person classes waitlisted most of

Happy Family Day to our incredible members at Me F

We are reopening on Tuesday February 16th for in p

You won’t find a better deal for virtual fitness

Lockdown your Fitness! Get our virtual membership

We’ve taken all your favourite 1 of a kind fitne

Love our members!!! 20 signed up for Virtual Lift

What a crazy but awesome year! Life is what you ma

Crushing our virtual workouts! Thanks for joining

Congratulations to our Personal Training Client an

We’re not letting a 28 day lockdown stop our cli

Head on over to our YouTube channel (link in bio)

It’s almost here and you still have time to join

The 12 Days of HIITmas workout with @jennb1971 and